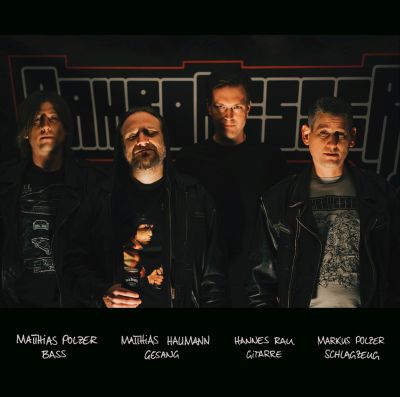 The band Rambomesser was founded in late 2015. The four guys from the Ulm area were already very active as a crossover band around the turn of the millennium under the name Acrid Groove. Among other things, the stage was then shared with acts such as H-Blockx, Son Goku feat. Thomas D., Megaherz or the Baffdecks.

Musically, the four are now treading new paths. German lyrics are combined with cutting riffs and driving beats. In terms of style, Rambomesser move somewhere between Bay Area Thrash, Neue Deutsche Härte and Alternative Metal, with the crossover roots still flashing through here and there. With a small wink, the cheeky-ironic lyrics move away from the usual metal clichés.

With the self-titled E.P. Rambomesser prove their musical diversity for the first time in spring 2017. The positive response is also reflected in the demo review in the April 2018 Metal Hammer edition. As a result, the jump to the category "Rising Star of the Year" in the annual rock look 2018 of the Metal Hammer edition January 2019 was made.

With the E.P., Rambomesser went "on the road", mainly in their home-region in and around Ulm to rock the clubs. But also audiences from further away were pleased, for example, in Vienna (Café Carina) and Zurich (Ebrietas). Other highlights for Rambomesser were the appearances at the Bulletproof Festival in 2018 and 2019.

A music video should of course not be missing, so the song "Rambomesser" was shot in mid-2018 to be finally released in October 2018.

At some point in 2019, songwriting for Rambomesser's current album “Krawall am Kiosk” finally started: This was published in May 2020. "Krawall am Kiosk" contains 5 new songs, as well as those already contained on the E.P. "Rambomesser". Musically speaking, "Krawall am Kiosk" represents the consequent further development of the path chosen for "Rambomesser". On the one hand, there are catchy choruses and, as in the case of "Mache-Lieb-Lang", melodic verses; on the other hand, Rambomesser overall have increased their heaviness and speed compared to its predecessor: however, the result is the typical Rambomesser kick-ass metal style.

You can get an idea of â€‹â€‹this on the current single "Action Star", of course also as a video on social media.